Dasu - After You've Gone by Dasu | Free Listening on SoundCloud

Off the Shelf. Tech Talk Radio. Views from the Corner Office. 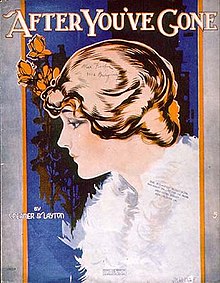 It pays to shop a little now to save a lot later. OPM tells agencies to review, streamline performance management, disciplinary policies Workforce. More at tsp.

Government Events. Don't say that we must part, Don't break my aching heart You know I've loved you for so many years Love you night and day, How could you leave me, can't you see my tears?

Your current browser isn't compatible with SoundCloud. Writers are understood to have been working on scripts for the fourth series of the BBC1 sitcom for a month and the cast had been booked. The move follows the axing of BBC3 comedy drama Phoo Action just days before filming was due to begin on a full series in Scotland.

The BBC previously announced in January that the show — which features Lyndhurst as a dad who shares parental duties with his mother-in-law, played by Celia Imrie — had been commissioned for a new series of eight episodes and a Christmas special for this year and a further part run and festive one-off for However, the BBC has now said that the programme will end this year, with the final episode of the current series airing on Friday and a festive special at Christmas.


Besides the cast having been booked for the next series, the crew had been told to block out filming periods for next year. It is understood that part of the reason why the new series was not filmed was because of the burgeoning cost of the production and talent, which made it too expensive to be sacrificed to Coronation Street. The sitcom had become something of a sleeper hit for BBC1 hitting nearly 6 million viewers last year, although ratings had fallen for its current series, with its premiere in September attracting 3.

One insider said there was now real anxiety at the BBC about launching new family sitcoms because of a lack of decent slots.